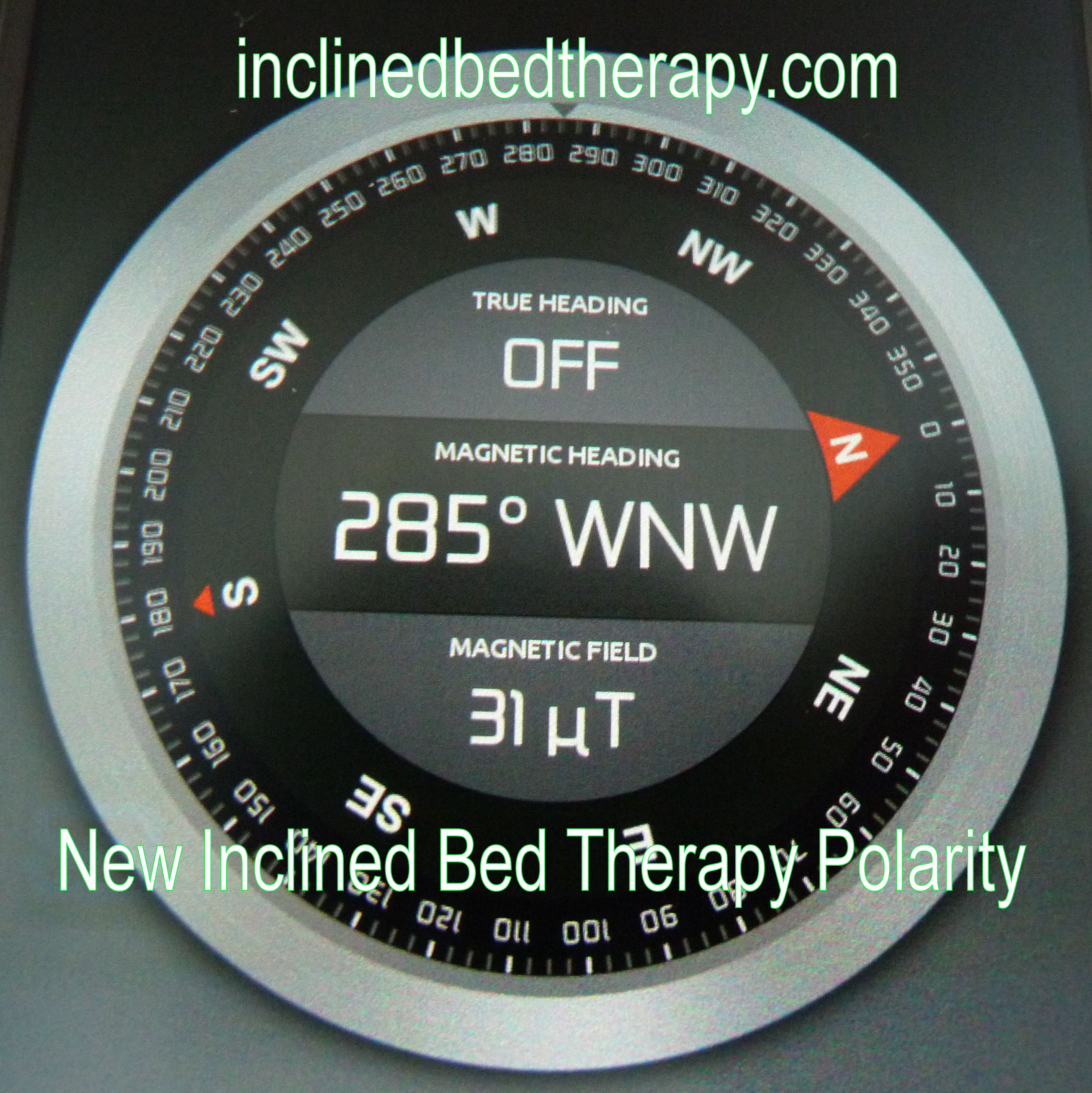 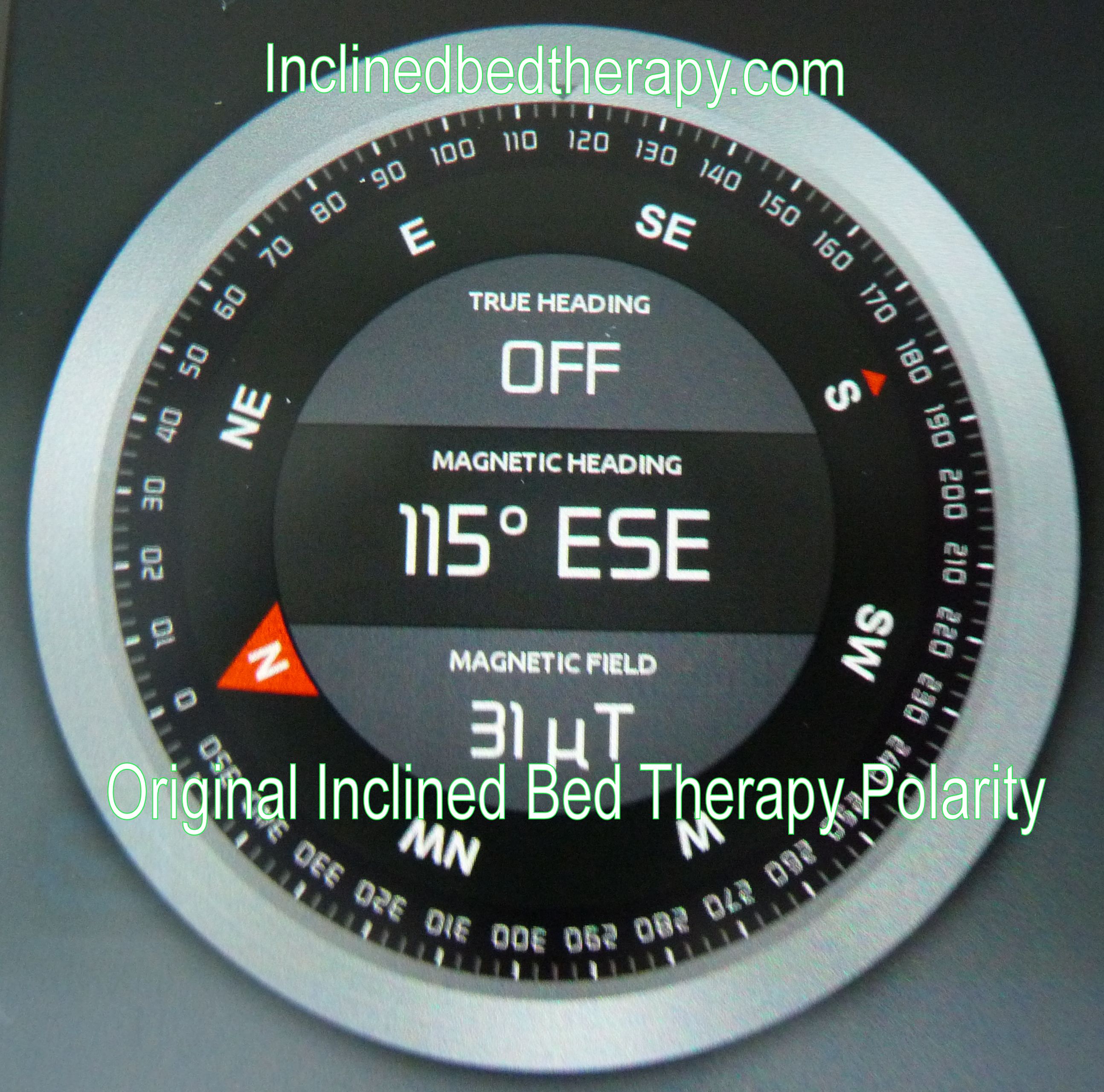 New Inclined Bed Therapy Experiment To Determine Effect Of Turning Our Bed Around Cahnging The Polarity Of Our Bed.
Our Experience:

After sleeping on an Inclined Bed with our heads facing East South East using a mobile phone compass app to find the direction of our bed, we decided to turn the bed 180 degrees to face West North West as shown in the two compass images above. It is worth rembering that we have been using Inclined Bed Therapy since 1994, some 20 years now, so changing our polarity could be quite different.
Our first night was indeed very strange. As soon as we lay on our inclined bed, we could determine that it was very different. My wife normally takes at least an hour and sometimes 2 or more hours to fall asleep and is easily woken up.
We also felt very strange, almost drunk with the room swaying as we moved. On getting out of bed in the night, I found myself moving sidwards, almost falling and on waking for several days this continued, almost as if I was drunk.

Now some years ago, I did an experiment placing a powerful magnet under a bottle of water for 48 hours. Then I drank the water and felt the same effects as if being drunk and disorientated. I had to lay down for quite some time before it went away. Clearly polarity is far more important than anyone realises.

1. After changing the direction our bed faces, we sleep better, fall asleep much quicker, my wife now falls asleep within around 15 minutes, some times less. She has had no hot flushes since and does not overheat any more which is fascinating.
I find that I am sleeping on my right side now and given we have a king size bed, I could sleep on either side and yet this side now seems more natural. I also find myself sleeping on my back more

2. We have both been experiencing muscle cramping occasionally, though this is less frequent now and possibly related to lower body temperature.

I remember being told a story about a very noisy baby ward in a hospital, babies were continuously crying and unable to sleep for long. A new matron was given the ward and she immediately turned all of the cribs / cots around and the ward went silent almost instantly. The ward was no longer the noisiest ward in fact it became serene and peaceful. During my last interview on Peoples Internet Radio, I recalled this story and thought about putting it to the test. Simple though it may be, I feel it has unlocked yet another very important area of research.

Sleep has been one of God’s most precious blessings since human’s existence and it is vital for both body and soul. External and internal factors like age, sex, drug, illness, psychological pressure, job, life style and Earth's magnetic field influence quality of sleep drastically.

In this study we tended to find the relationship between geographical direction during sleeping process and quality of sleep.

Methods: In a cross-sectional descriptive study, 200 students from university of Iran, Mazandaran province were selected arbitrarily. After exclusion, based on exclusion criteria, the number of research’s samples reached to 153. Tools used regarding collecting data were standard Pittsburg sleep quality inventory (PSQI) in order to assess the quality of the sleep.

Symptom Checklist-90-Revised (SCL- 90-R) was used in order to study psychiatric symptoms and an anonymous demographic questionnaire was used to record personal information, filled by individuals. Software Spss17 with chi-square were used for statistical analysis procedure.

Results: 30.7%(47cases) slept in north-south direction, 22.8%(35) in south north, 26.2%(40) in east west and 20.3%(31) in west east. Among PSQI sleep scales, there was a strong relationship between difficulties in falling asleep with geographical directions of sleep (p<0.001). No significant relationship between sleep directions and other scales has been found.

Conclusion: Considering the high prevalence of sleep difficulties and strong relationship between geographical directions and quality of sleep. With respect to this study, sleep in north-south position can be advised to improve sleep quality and it necessary in order to maintain sleep hygiene.

CONCLUSION In order to study the impact of the geographical directions during sleep on the quality of sleep we conducted this study. There was significant relationship between difficulty of falling asleep and geographical direction (p<0.001), in the north-south sleep direction, the least sleep difficulty existed, and in the west- east the most. Similar studies in the area of the effect of the earth's magnetic field on the quality of sleep has not been done, so comparing the results of this study with other researches is not possible.

Studies that can be somehow compared to the present study are: Study of Torbjorn and his colleagues and also Tworoger, creating artificial magnetic field, which had no effect on the structure of sleep (15-16). In this study Earth's magnetic field has been effective. Mesquita evaluated the role of stressor on the quality of sleep and concluded that stressors can make Sleep disorder (17).

The present study has been conducted out of exams season in order to remove psychological pressure and according to SCL- 90-R, samples who were suffering from anxiety excluded. Chen and also James showed that the level of education could impact on sleep difficulty (18-19).

Almost a similar study in this field has been done by Falarigna(222).

In our study all the participants were university students, therefore education as a The Relationship between Quality of Sleep and Geographical Directions during Sleeping Process © The International Journal of Indian Psychology | 143 potential interfering factor was removed. Broun studied; type of job on the quality of sleep is important factor (23). In present study, all the participants were students (as a job) so, job’s role as an agent excluded, (all courses were full- time)

Physical disorder, as an important factor in creating disturbance in quantity and quality of sleep showed by Mc Namara (24). In this study, those had physical problems in recent month were excluded, so we can eliminate this factor.

This point worth mentioning again, an exact similar research to this study has not been in the literature so we tried to compare almost similar researches and to remove the confounding variables as much as possible to survey real impact of geographical direction on the quality of sleeping process.

Eventually based on the results of this study, sleep in north-south direction, means nearly to the earth's magnetic field direction, is the cause of better quality and less problem of sleep, so it can be recommended to add to sleep hygiene points. Declaration of interest: None

Will continue to update

Dependence of a sleeping parameter from the N-S or E-W sleeping direction.

Magnetic alignment in grazing and resting cattle and deer

We demonstrate by means of simple, noninvasive methods (analysis of satellite images, field observations, and measuring “deer beds” in snow) that domestic cattle (n = 8,510 in 308 pastures) across the globe, and grazing and resting red and roe deer (n = 2,974 at 241 localities), align their body axes in roughly a north–south direction. Direct observations of roe deer revealed that animals orient their heads northward when grazing or resting. Amazingly, this ubiquitous phenomenon does not seem to have been noticed by herdsmen, ranchers, or hunters. Because wind and light conditions could be excluded as a common denominator determining the body axis orientation, magnetic alignment is the most parsimonious explanation. To test the hypothesis that cattle orient their body axes along the field lines of the Earth's magnetic field, we analyzed the body orientation of cattle from localities with high magnetic declination. Here, magnetic north was a better predictor than geographic north. This study reveals the magnetic alignment in large mammals based on statistically sufficient sample sizes. Our findings open horizons for the study of magnetoreception in general and are of potential significance for applied ethology (husbandry, animal welfare). They challenge neuroscientists and biophysics to explain the proximate mechanisms.

You can Support my work securely Via Paypal Donate or card.

Go to top
Dome2default is designed by JoomlaShine.com | powered by JSN Sun Framework